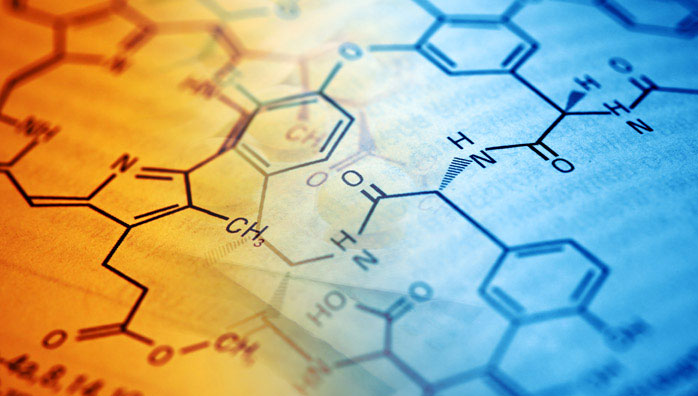 Comparison of the efficacy of strontium-89 chloride in treating bone metastasis of lung, breast, and prostate cancers

More than 50% of patients with cancer experience bone pain, and breast-, lung-, and prostate cancer-associated metastatic bone diseases account for 80% of cases of bone pain among cancer patients.[1] Bone metastasis can cause unbearable intractable pain, leading to reductions in quality of life. Strontium-89 chloride (89 SrCl2) is a radiopharmaceutical of palliative care used to treat metastatic bone cancer-associated pain.[2],[3] The agent can effectively kill tumor cells, induce tumor cell apoptosis,[4],[5] and restore patients' immune functions.[6]89 SrCl2 is the palliative care mainly used to treat pain caused by the bone metastasis of prostate and breast cancers.[7],[8] The treatment is considered optimal for this indication,[9],[10] and in some cases, metastases might subside.[11] Lung cancer is currently the malignant tumor with the highest incidence and mortality in China,[12] and as its incidence continues to increase, research on the application of 89 SrCl2 to treat the bone metastasis of lung cancer is also increasing, although studies have reported varying effects. To further investigate the clinical application value and characteristics of 89 SrCl2 in treating pain caused by the bone metastasis of lung cancer, we followed up patients with lung cancer and bone metastasis who underwent 89 SrCl2 treatment and compared the treatment outcomes with those of patients with prostate or breast cancer and bone metastasis. Meanwhile, the related literature was reviewed to analyze the possible factors that might affect treatment efficacy.

Patients with lung cancer, prostatic cancer, and breast cancer, who were treated by 89 SrCl2 in Shao Yifu Affiliated Hospital and the Second Affiliated Hospital of School of Medicine in Zhejiang University were collected from 2009 to 2013. Patients were excluded if they had not bone X-ray films, computed tomography/magnetic resonance imaging (CT/MRI), or pathological examination had diagnosed with extensive metastatic bone tumors, or survival time was <3 months after treated by 89 SrCl2. A total of 246 patients were obtained, and all of these patients had been signed informed consents before treatment. Among the 126 patients with lung cancer, 88 were male, and 38 were female. The patients, including 88, 16, 15, 4, and 3 patients with adenocarcinoma, squamous cell carcinoma, nonsmall cell carcinoma, mixed carcinoma, and small cell carcinoma, respectively, were 40–81 years old. The control group included 120 patients who underwent 89 SrCl2 treatment during the same period, including 71 patients with breast cancer and 49 patients with prostate cancer. The age of the control group ranged from 36 to 79 years, and the duration of primary diseases varied from newly diagnosed to 5 years. All patients were confirmed to have an extensive metastatic bone tumor by bone scintigraphy, radiography, CT/MRI, or pathological examination. The bone metastatic lesions were observed as abnormal radioactive concentrated shadows (osteoblastic lesions) by bone scintigraphy. The patients had various degrees of bone pain, with or without activity limitation, and some patients had experienced treatment failure after radiotherapy and/or chemotherapy at least 2 months before 89 SrCl2 treatment. The examination results for hepatonephric function were normal for all patients, and there were no cases of spinal pathological fracture or spinal cord compression. Each patient had a leukocyte count of >3.5 × 109/L and a platelet count of >80 × 109/L.

The treatment medicine (89 SrCl2) was provided by Shanghai Kexing Co., China. The therapy was intravenously administrated at a dosage of 1.48–2.22 MBq (40–60 μCi)/kg body weight. The detailed information regarding the patients' body weights, the drug dosages administrated, the batch numbers used, and possible side effects or discomforts experienced during drug administration was recorded.

The follow-up period after 89 SrCl2 treatment in the two groups ranged from 3 months to 4 years. In addition to regular hemogram analysis, the patients were mainly observed for improvements in pain, sleep, and activities to determine the efficacy of treatment. According to World Health Organization (WHO), the grades of pain includes O grade, no pain; I grade, mild pain, is intermittent pain, and drug may be not used; II grade, moderate pain, is continuous pain and interfere with good rest, and paregoric is needed; III grade, severe pain, is continuous pain and pain is not relieved if drug is not used; IV grade, very severe pain, is continuous sharp pain with changes of blood pressure and pulse. The evaluation of therapeutic efficiency of 89 SrCl2 treatment includes (1) Complete remission (CR), entirely painless after treatment; (2) partial remission (PR), pain is obviously relieved, and patient can live a normal life and sleep is not basically interfered; (3) mild remission (MR), pain is relieved but patient still feels pain, and sleep is interfered; (4) invalid, pain is not relieved than before treatment. Of these, CR + PR + MR is believe as effective.

89 SrCl2 had a relatively long half-life (50.6 days), and 90 days after the injection, the amount of the compound retained inside the bone metastatic lesion ranged from 20% to 88%. Consequently, the efficacy of therapy could be maintained, thus providing more extensive and long-lasting pain relief, improving patients' quality of life,[13] and increasing their survival time.[14]

89 SrCl2 was an effective treatment for the bone pain of patients with prostate or breast cancer and bone metastasis.[15] In this study, among the 120 patients in the control group, 114 experienced significant analgesic effects after 89 SrCl2 treatment, and the total efficacy rate was 95.0%.89 SrCl2 could safely and effectively relieve the bone pain caused by the bone metastasis of lung cancer, prolong patients' survival time, and reduce the annual incident rate of skeletal-related events.[16] However, the efficacies reported by most domestic and foreign studies varied from 46.2% to 96.8%,[17] and the differences were relatively large, which might be related to the differences in the pathological compositions and efficacy criteria. Among the patients with lung cancer, adenocarcinoma had the highest incidence of bone metastasis, followed by squamous cell carcinoma and small cell lung cancer, which was consistent with the finding in this study that adenocarcinoma most commonly resulted in bone metastasis. The efficacy of 89 SrCl2 against the bone metastatic pain of lung adenocarcinoma was superior to that against metastatic squamous cell carcinoma because the blood supply inside adenocarcinoma is richer than that inside squamous carcinoma; thus, the blood supply inside the metastatic lesion might also be abundant. Meanwhile, the affinity of 89 SrCl2 for bone resulted in its substantial accumulation inside the blood supply-rich bone metastatic lesions of adenocarcinoma and stronger cytotoxic effects.

Although the efficacy of 89 SrCl2 treatment against bone pain caused by the bone metastasis of lung cancer was significantly lower than the that observed for breast and prostate cancer, and the effects of treatment on the peripheral hemogram were significantly better in the lung cancer group, we believe that if patients can be carefully chosen according to their pathological types and treatment situations,89 SrCl2 could have greater safety and efficacy in relieving bone pain caused by bone metastasis. 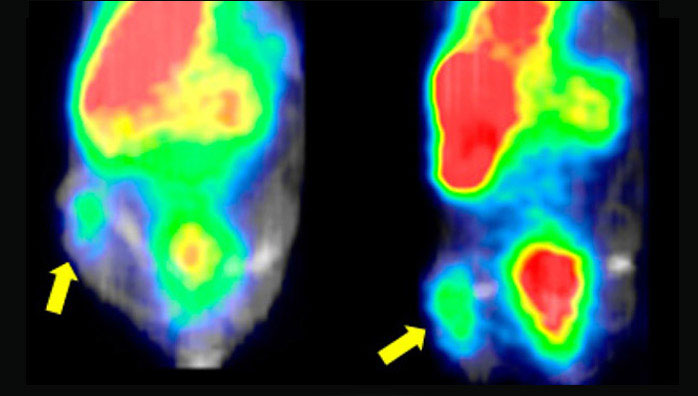 Development of a Potential Gallium-68-Labelled Radiotracer Based on DOTA-Curcumin for Colon-Rectal Carcinoma: From Synthesis to In Vivo Studies 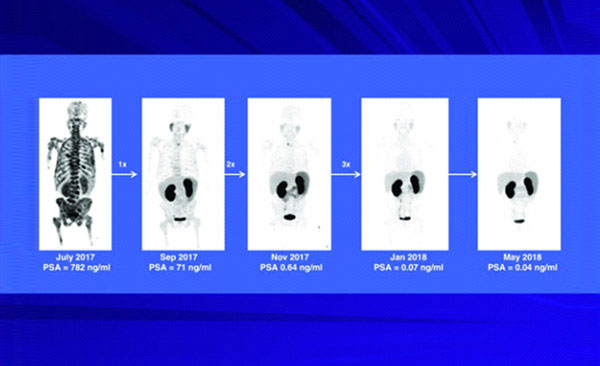 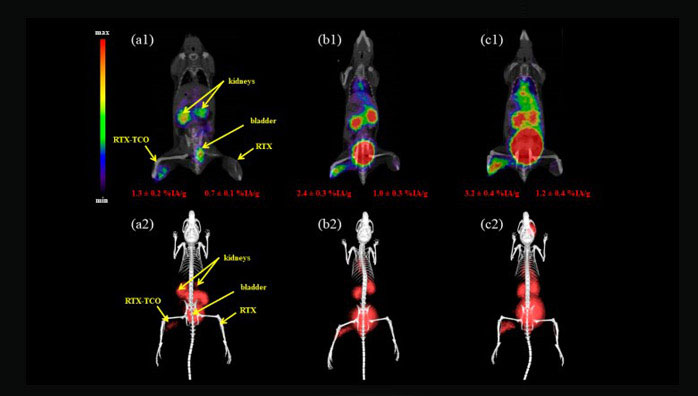 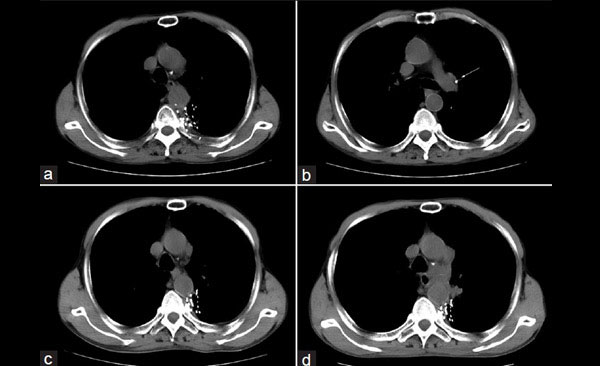 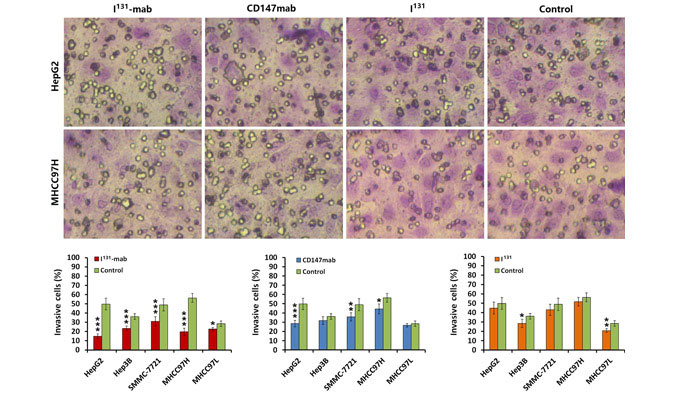 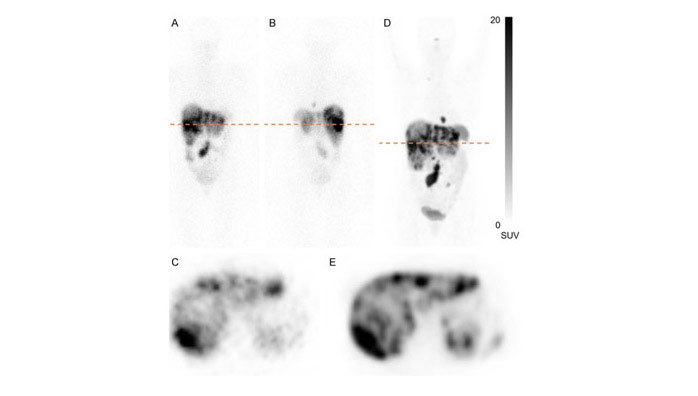 Somatostatin receptor PET ligands - the next generation for clinical practice Comparison of the efficacy of strontium-89 chloride in treating bone metastasis of lung, breast, and prostate cancers